A new paper “Climate variability affects water-energy-food infrastructure performance in East Africa” has just been published in the journal One Earth. The paper, led by Christian Siderius with other members of the UMFULA project team, including Katharine Vincent, highlights how climate variability is poorly understood in East Africa’s climate transition zone, where variability in rainfall is projected to increase. The implications of these projected changes in climate on infrastructure performance are poorly understood, with implications for the water, energy and food sectors. 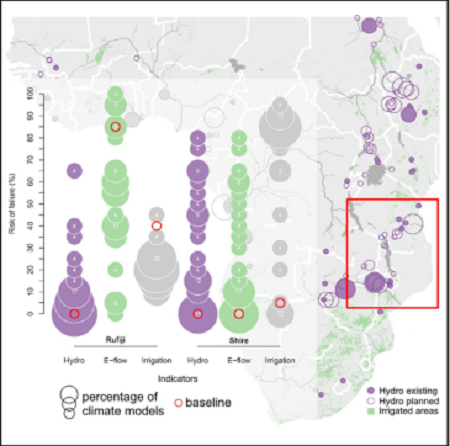 Infrastructure design should take into consideration the potential for changes in climate variability and recognise the limitations of planning on the basis of short time series of observations or projections. In the Rufiji basin in Tanzania and Shire basin in Malawi, a repeat of an early-20th century multi-year drought would challenge the viability of proposed infrastructure (dams). A long view, which emphasizes past and future changes in variability, set within a broader context of climate information interpretation and decision-making, is crucial for screening the risk to infrastructure and informing contingency planning to manage climate risk.