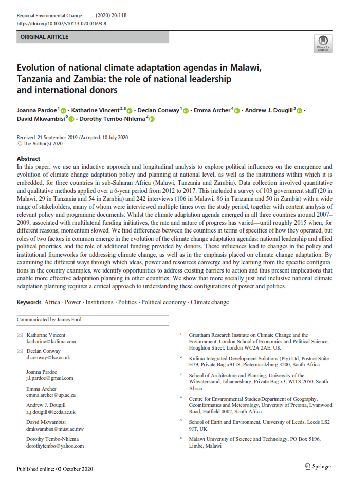 An output of the Future Climate For Africa UMFULA project has just been published. "Evolution of national climate adaptation agendas in Malawi, Tanzania and Zambia: the role of national leadership and international donors" unpacks the ways in which political economy has affected the emergence and evolution of national climate adaptation planning in three sub-Saharan African countries over the last decade, based on data collection over a six year period. Despite variation in the specifics of how they operated, the roles of two factors in common emerge in the evolution of the climate change adaptation agendas: national leadership and allied political priorities, and the role of additional funding provided by donors. These influences lead to changes in the policy and institutional frameworks for addressing climate change, as well as in the emphasis placed on climate change adaptation. By examining the different ways through which ideas, power and resources converge and by learning from the specific configurations in the country examples, the paper identifies opportunities to address existing barriers to action and thus present implications that enable more effective adaptation planning in other countries.